At the beginning of December I had the opportunity to attend the Executive Program of Singularity University. I can assure you that it was a very intense week!

You are told about design thinking, artificial intelligence, the Internet of Things, robotics, virtual reality, augmented reality, neuroscience, blockchain, cybersecurity, leadership... with the aim of understanding exponential development and inspiring you to transform the industry and solve the great challenges that humanity faces.

Personally, I was struck by the advances that are being made in Exponential Medicine.

It was very inspiring to understand how design thinking and agile methodologies will help us redefine our business strategies TWEET.

There was a lot of emphasis on how to be the leader of the future and we explored the critical skills that leaders must learn to navigate successfully in a world of constant change TWEET.

To foster innovation, we should promote the culture of discovery TWEET and for this we should ask ourselves different questions. I will talk about all this in future posts, but for now I would like to tell you in detail about a week at Singularity University.

Singularity University is an academic institution located in Silicon Valley founded in 2008 by Peter Diamandis and Ray Kurzweil with a clear purpose: Be Exponential.

Peter Diamandis is an entrepreneur in the space industry and author of two best-selling books: “Abundance – The Future Is Better Than You Think” and “Bold – How to go Big, Create Wealth & Impact the World”. 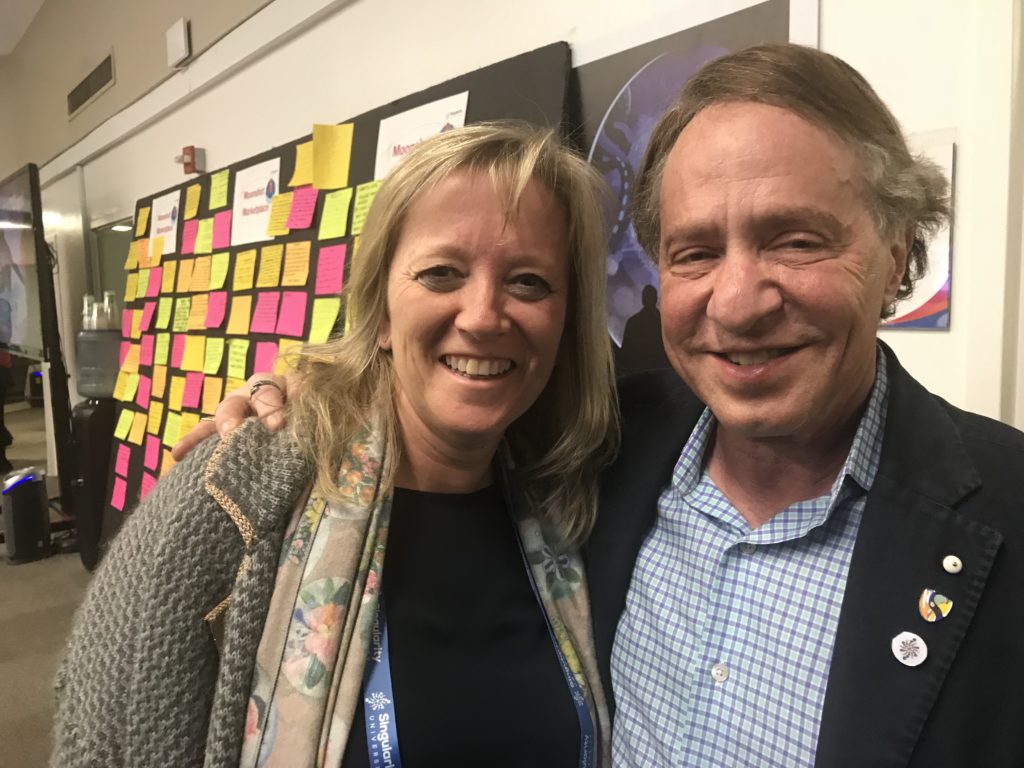 Ray Kurzweil is an eminent futurist, inventor and scientist specialised in artificial intelligence. Since 2012 he has been Director of Engineering at Google and is the author of the book "The Singularity Is Near: When Humans Transcend Biology”.

During the week there were 97 of us in total from 30 different countries, covering 23 industries. Very diverse people, such as investors, managers, entrepreneurs, consultants... A lot of talent in the same room! And 25% of us were women. We will need exponential growth in this area! One of our number included Denisse Goldfarb, Director of Human Resources at Microsoft Chile, a star in Human Resources innovation. We had a great time together!

We stayed in a hotel in Cupertino, the heart of Apple. In November they opened the Apple Park Visitor Center where, apart from a café, terrace and Apple Store, there is an exhibition on what the new circular headquarters directly opposite will be like. There you can see a large 3D model in which interactively, using augmented reality, you can see the offices inside. 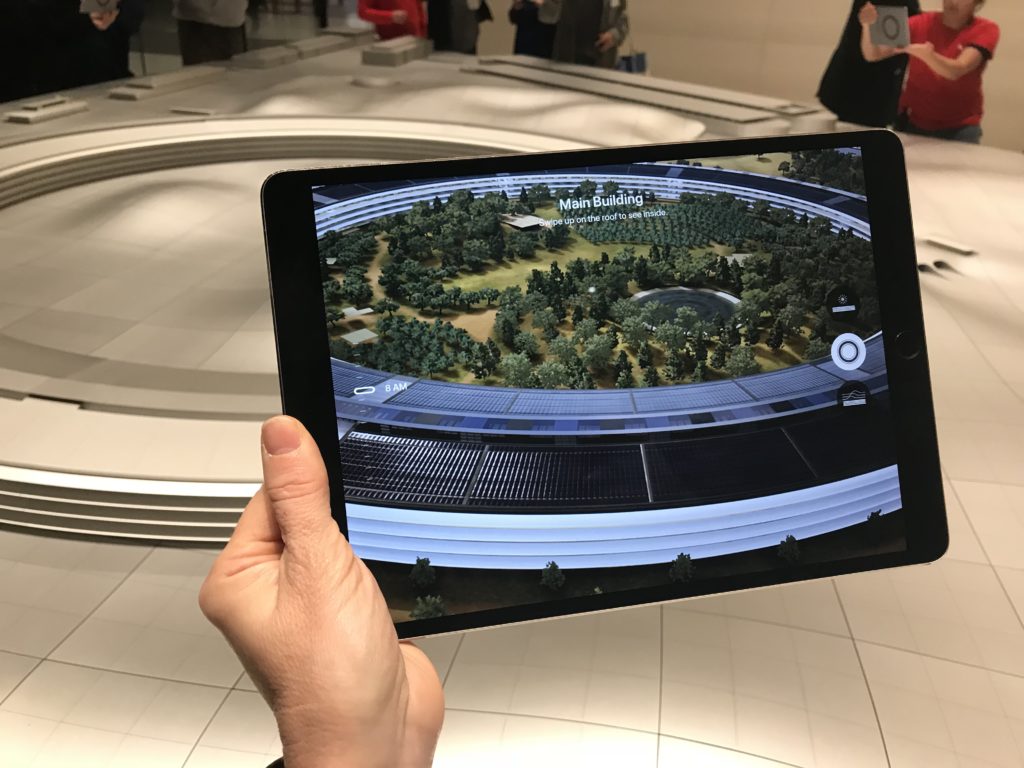 The Singularity University campus is located at NASA’s Ames Research Center, in Mountain View, California. There is a large hangar there recently acquired by Google. Everything is taken care of down to the last detail: an Innovation Lab where you can experiment with virtual reality, augmented reality, robots, drones, etc., a visit to Palo Alto and of course a graduation party! 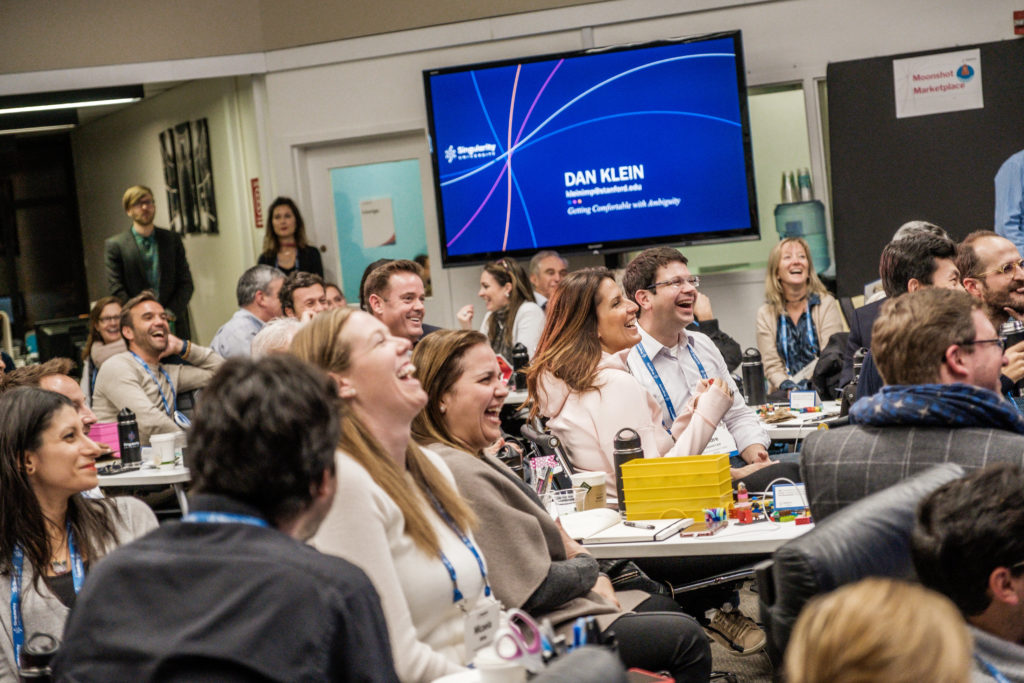 We started the week with Peter Diamandis. He gave us clear messages about how exponential growth is shaped, and how the 6 Ds (Digitization, Deception, Disruption, Dematerialization, Demonetization, Democratization) will impact every product or service. TWEET

The world is going from linear to exponential, from local to global and from scarcity to abundance TWEET 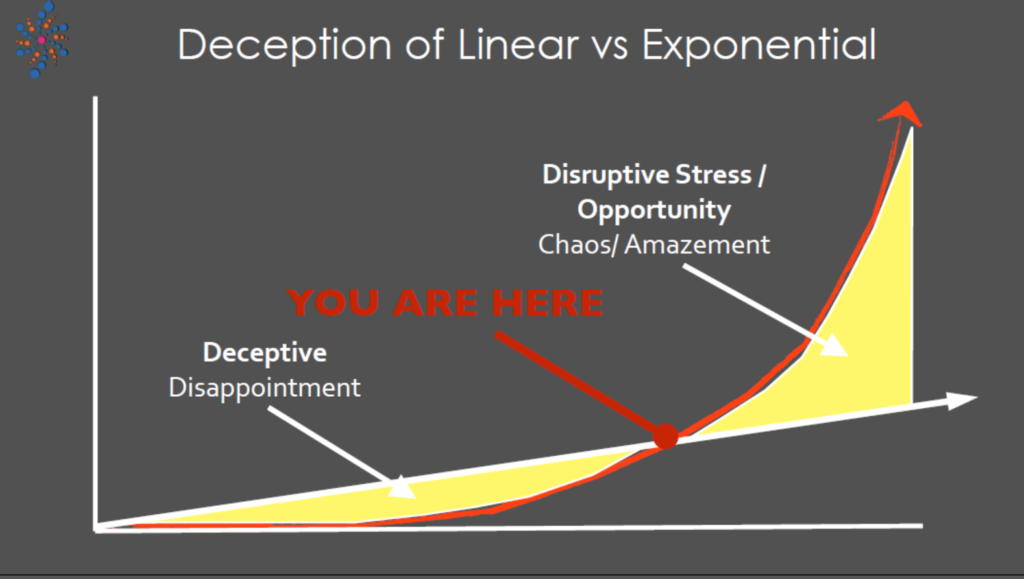 A warning from Peter: “Don’t expect to find answers this week. Expect to find the right question!” A message to consider: we must learn to ask questions...

We will need 3 skills to face the future: TWEET

The second day was an avalanche of information about artificial intelligence, medicine, Internet of Things (IoT), robotics, virtual reality and augmented reality. It was impressive to see how sensors, networks, data and machine learning will allow all these things to interact with the world.

We are presented with new paradigms:

It is clear that no company can ignore this wave of new technologies in its strategic reflections and in understanding how fast the world is changing.

The third day was one of the most intense. We started with how to deal with what they call the Global Grand Challenges: energy, food, environment, health, prosperity, learning, security, water, space, disaster resilience, government, housing and space. 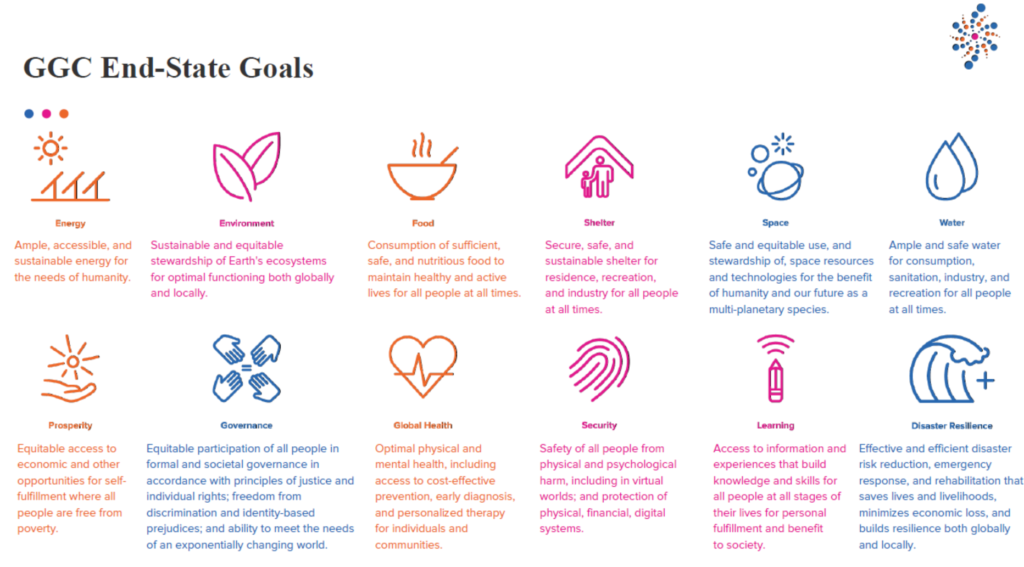 To face these challenges they use the Moonshot Thinking methodology TWEET, which consists in no longer thinking about achieving an improvement of 10% to try to multiply the current results by 10. For this they associate a radical solution and a disruptive technology with each challenge.

The presentation from Andre Wegner on Digital Manufacturing was very inspiring. He placed a lot of emphasis on the concept of Agility. One of his phrases is “Less Toyota and more Zara”, stressing that in Zara they have developed the concept of Agility to such an extent that they are able to distribute according to demand and sell only 10% of their stock in sales.

Disruptive explanations were the possibility of 3D printing in space and nanotechnology which will allow us to produce materials at an atomic level.

The highlight was undoubtedly Divya Chander. Divya is a neuroscientist at Stanford University who talked to us about Exponential Medicine.

The advances being made in this field are surprising. I was impressed with brain surgery in which a Parkinson's patient is stimulated with an electrode implant in their brain. And sensory substitution which enables a blind person to see through sensors on their tongue. Companies such as Neuralink, of Elon Musk, are researching computer interfaces for implantation in the brain.

We finished the day with Amin Toufani, with the concepts of Exponential Economics (Exonomics) and the Adaptability Quotient (AQ).

With the collaborative economy (AirBnB, Wework, Zaarly, Udemy, HourlyNerd) we saw that we value more having access to a service than ownership itself.

Amin insisted that the biggest challenge in learning is actually unlearning what we have learned, so it will be vitally important to put more emphasis on the Adaptability Quotient (AQ) and less on the Intelligence Quotient (IQ) TWEET. In this changing world the ability to adapt will be fundamental, and to develop it is best to examine what we know that we don’t know!!

The fourth day was focused on design thinking. I really enjoyed myself! Lisa Kay Solomon gave us a master class on how to lead innovation through design thinking TWEET. Lisa is founder of the Innovation Studio and teaches innovation in the MBA in Design Strategy at the California College of the Arts.

To "lead as a designer" 7 key skills will be necessary: TWEET

That same day we also dealt with a variety of topics such as: Microbiome, Biotechnology, how to be an entrepreneur in space before finishing with a rapid prototyping workshop: TWEET in 26 minutes we had to define a problem, find several solutions, select one and prototype the solution, and test the solution with a customer.

This was the day of Blockchain, Quantum Computing and Cybersecurity.

If we had to define blockchain in a sentence it would be “a revolution in the exchange of information” TWEET. We are moving to distributed “peer-to-peer” information, opening up new opportunities in areas such as identity and ownership documentation, authentication of goods and services, fraud and cybersecurity.

Blockchain will be a disruptive element that will transform the way banks, insurance companies, supply chains and all those that provide intermediary services in transaction agreements operate. Cryptography and codes will be the new model. Do not miss this explanatory video about in which industries blockchain is being a disruptive element.

We finished the day with a talk from Ray Kurzweil focused on artificial intelligence and the use of exponential technologies.

A curiosity is that the term Singularity which gives this university its name was used by Ray early on to express the concept of “explosion of intelligence” which would happen at the moment machines surpass human intellect, improving their own design themselves and becoming more intelligent. As the machine becomes more intelligent, it could give rise to a cascade of self-improvement and a sudden increase in superintelligence or a singularity.

The final day was a great inspiration for me. We started with John Hagel analysing how to make transformations in corporations TWEET. John is co-chairman of Deloitte Center for the Edge and author of "The Power of Pull", "Net Gain", "Net Worth", "Out of the Box" and "The Only Sustainable Edge".

According to him, companies should focus on scalable learning TWEET. Companies that focus on scaling efficiencies will not be well positioned to accelerate learning and achieve improvements in results. Future winners will be those people who make a transition and reassess all aspects of the business to understand what is necessary to achieve scalable learning.

Kyle Nel's gave an impressive explanation of the case study of Lowe's, a retail company that has developed its business exponentially.

He was followed by Rob Nail, CEO of Singularity University. He left us the 7 fundamentals to survive the technological disruption: TWEET

At the end of the final day at Singularity University, I realised that the word exponential had taken on a profound meaning for me TWEET

And I went back to thinking about the three skills that we will need to face the future: passion, curiosity and never giving up. All these changes that we are convinced that need to be made in our environment we should pursue ceaselessly.

Are you immersed in any exponential change? Pursuing any moonshot? Do you want to share it? You can leave your comment here.